A certain theme that I have noticed in my decisionmaking regarding the house is, well, a constant case of indecision. Being the single owner of the house, unlike my old apartment where my parents owned 1/3 each, means I get to have the final say in all things. For better and for worse. Constantly second-guessing myself is a behaviour I recognise from back when I had just gone the self-employed route within the design business instead of being a hired junior designer at a firm. How can I make the right decision if I do not have a boss to ask?

When it came to design, I would often ask friends for their input before I learned to trust my own knowledge and instincts. Similarly, now I ask my parents for their thoughts about my renovation decisions.

In some cases I have learned to trust the process, that when I get started on a part of the work it will become obvious what needs to be done, or I’ll stumble across the perfect item when scouring Blocket. One of the larger things I have worried about is what type of flooring to put in the kitchen. Originally I wanted solid wood, then ceramic tiles, before I landed on linoleum flooring. And I was lucky to find my dream linoleum on Blocket for less than half the RRP (pre-owned but in good condition). It’s called Marmoleum Click and it’s made by Forbo.

Another area in which I haven’t been able to make a decision yet is the heating of the kitchen. Currently there is a large radiator along one of the walls, but I won’t be able to keep it because that wall is where I will put the majority of my kitchen units. None of the other walls in the kitchen are suitable for a radiator simply because the space available is too little to fit a radiator large enough to heat the entire room. The two alternatives I am considering is either underfloor heating, or a plinth heater. Underfloor heating is really common in Sweden these days, and it won’t be difficult for me to find a system that fits my needs. It’s not exactly cheap, but I have room in my budget for it. The overall installation would be pretty involved though, and the sheer size of the project is pretty daunting. There are both electric and hydronic systems, and since I have hydronic central heating already, that is probably what I will choose. The cost of the system is a bit more expensive than the electric variant, but the heating cost over time will be lower. The other option is a plinth heater. It’s essentially a heating fan that is made to fit in the kickspace under the kitchen units, and it blows warm air across the floor. The installation is a lot more straightforward, and it would be easier to replace in case something happened. The negative though is that these systems are very uncommon in Sweden, and it could be difficult to find someone to install it.

Reviews I’ve found from other swedes mention that while they’re not loud, they do make a considerable noise while running. What would be the point of having a heater if I wouldn’t be able to keep it on for any extended periods of time because of the noise? I am really sensitive to low humming noises, and at my mum’s house I keep having to turn off the lights in the kitchen because they hum too much. If any reader has experience with plinth heaters, I would love to hear it! I am either looking at Myson’s Kickspace, or Spacesaver SS80. Here’s also the underfloor heating system I’m looking at.

When planning the kitchen I’ve also tried to do my research on different brands and manufacturers of the units themselves. And what appears to be the consensus in Sweden is that IKEA kitchens are as decent as anything else (though the cheapest doors fall apart after a while), but that it’s a good idea to get the taps elsewhere. But that once again leaves me with the dilemma of which kitchen tap to choose. Do I go for something a bit period looking, or do I choose something plain and modern? I know for sure that what I want is a single-lever monobloc, but should I pick one with a pull-out spout? I can find period style taps that are single-lever monobloc, but if I want a pull out spout I’m limited to modern. Do I choose form over function? And is the function actually one I need?

Then we have the dilemma of picking the brand. Is Grohe the only way to go? Will it be pointless to choose something like Bristan or Cooke & Lewis since they won’t be any better than the IKEA (where I’d pick GLITTRAN or ELVERDAM) taps? Why isn’t google giving me any definite answers?

Here are some of the taps I’m choosing between 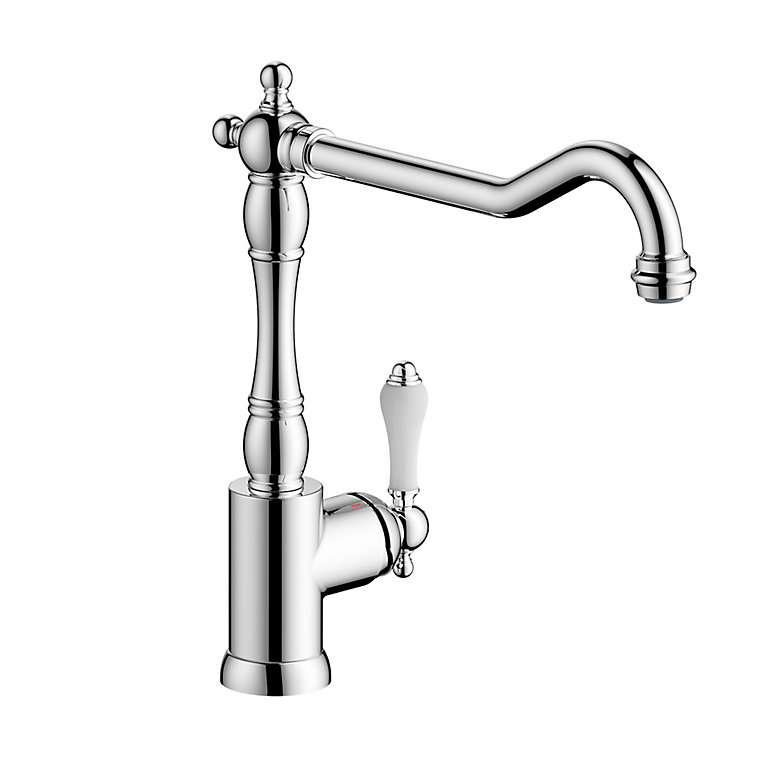 This chrome finish side lever tap from Cooke and Lewis'…

Luckily for me, I’m in no hurry and sooner or later these things will hopefully just work themselves out by me stumbling across something at less than half price. Well I can always hope!

Liked it? Take a second to support me on Patreon!

This blog started mainly to document my work with renovating the 1850s cottage I recently bought, but I will also cover topics like my work in jewelry design and illustration.

By using these links you can get money off on purchases. They’re for businesses where I am a customer too, and by using my links I’ll either get money off my monthly bill, or a discount on future purchases.